Did you know the Snapping Turtle is a Species at Risk in Ontario? (Special Concern)

Did you know that the province of Ontario still allows hunting/harvesting of Snapping Turtles?

Does this seem like the craziest thing you've ever heard?

The provincial government (Ministry of Natural Resources and Forestry) is proposing amendments to Area Descriptions, Hunting, Possession, Buying and Selling of Wildlife and Ontario Regulation Open Seasons under the Fish and Wildlife Conservation Act to streamline and modernize the management of small game and furbearer wildlife species in Ontario. THIS IS OUR CHANCE to say STOP THE HARVEST OF SNAPPING TURTLES!


On the bottom right of each page is a "submit a comment" button... I would encourage everyone to read this to pass it along to anyone they know who appreciates the issues associated with harvesting Snapping Turtles... The poor creatures face enough danger from nest predation to being mowed down on our roads.

Let them know how you feel!
Posted by Brandon Holden at 8:00 AM 8 comments:

I'm going to rant about Red-tailed Hawks. If the entire world can shift to emotion-based politics, I assume the birding community can handle this completely fact-free rant. If not, there's the door.

When I was a kid, I'm reasonably sure this is how Red-tailed Hawk subspecies were treated: 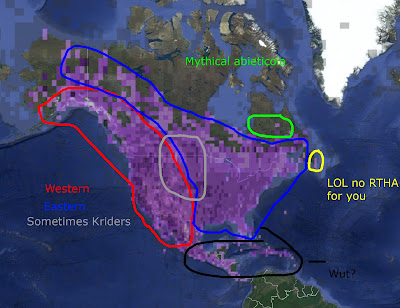 Abieticola was a mythical RLHA-like bird that hailed from the treeline in northern Quebec/Labrador... Over ten years ago I observed a bird that fit this bill - a freak juvenile looking RTHA with belly markings unlike anything I had ever seen (80-90% odd dark triangles across the belly) and sitting on the GROUND in a wide open field.... Then we had "eastern", "western" and something called Krider's from the prairies...

Maybe hindsight is 20/20, but it was pretty obvious that the "Eastern" birds that nested in the boreal were darker than the local birds... When our birds were sitting on eggs, it was possible to see a steady migration of heavily marked birds at the spring hawkwatch in Beamer/Grimsby...

Now that I've been "out of the raptor loop" for several years, I peek back and this is what I interpret: 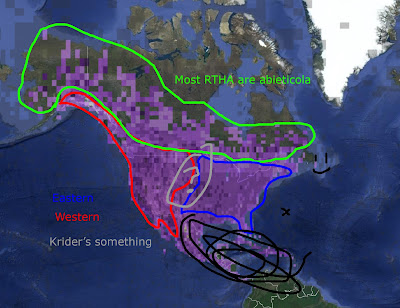 "Eastern" RTHA is now subjected to the pale local RTHA, and anything with a belly band is being called abieticola... Seemingly eating into the range of every other subspecies...

My confusion grew during a June/July visit to southern Saskatchewan, where I encountered DARK MORPH Red-tailed Hawks breeding just shy of the Manitoba and North Dakota borders.... and of course a quick search around the interwebs led me nowhere in trying to find a proper definition of "western" red-tailed hawk range...

Which leads me to believe that we actually know very little about where these population start & end, and trying to put any sort of a subspecies label on them is bordering on pointless... In the future, I'd love it if we could define them on a slider-scale of "northerly to southerly" and "more eastern or western" in their traits, perhaps with slightly more contrasting demarcations when dealing with ecozones (eg,/ Florida, Carolinian, Boreal, Prairies, Destern/Southwest, Northwest/mountains, Newfoundless).. Perhaps something like this: 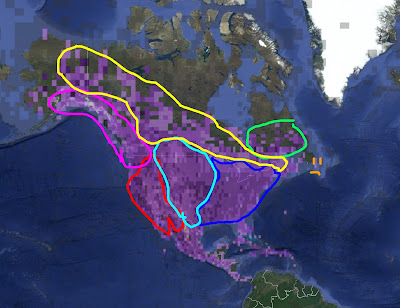 Alright! That's it! Rant over.

I'm just throwing this out there, with absolutely no idea what type of response I might get... Here it is:


Aerial Survey (via helicopter) of coastal James Bay in Winter!

Off the SW tip of Akimiski island in winter is a feature called a polynya -  one that occurs year after year - an area of open water surrounded by sea ice. Beyond that, most of James Bay doesn't actually freeze solid - meaning there will be cracks or leads within the ice. It's hard to find a graphic that illustrates this, but I've done my best: 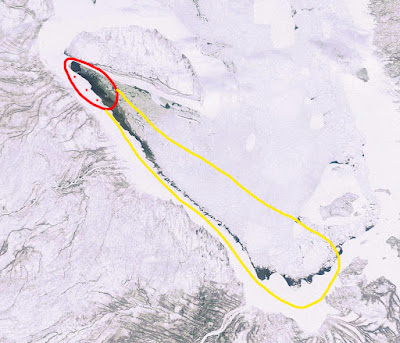 Red = where we would expect to find the reliable polynya


What would we expect to see? Well I'm glad you asked... In general - not a whole lot, but I think the experience alone may be worth it... At a minimum I'd like to think we'd see Common Eider and Black Guillemot - two species that ALWAYS overwinter on James Bay and presumably rely on the polynya... Where those two species are hanging out, I'd also expect to see King Eider and Long-tailed Duck. Anything beyond that may well be gravy, but I wouldn't be shocked to see Glaucous Gull, Snowy Owl and/or Gyrfalcon.

A major natural history bonus would be the possibility of seeing Beluga, Polar Bear or Bearded/Ringed Seals.

IF we were to see something "rare" - I'd place my money on Ivory Gull... Unexpected but no-less appreciated birds would be scoters (White-winged?), other gulls (Iceland, Herring or perhaps Kittiwake)... IF we saw a Dovekie, Thick-billed Murre or a Fulmar, I'd be darn happy - but I'm not getting my hopes up...

(What is this, an infomercial?)

There's an additional major selling point to this little adventure... We will DRIVE to Attawapiskat. That's right... In recent years a WINTER ROAD has been maintained from Cochrane to Moosonee to Attawapiskat... So we'll drive the whole way, presumably scoring ALL of the northern goodies from Spruce Grouse to Sharp-tailed Grouse to Pine Grosbeak to Hoary Redpoll flocks to Great Gray Owl to Northern Hawk Owl and perhaps more.

And by more I mean WILLOW PTARMIGAN IN WINTER. Hopefully. I can only hope that somewhere on that lonely road from Moosonee to Attawapiskat we'll come across one of these white beauties... I have it on good authority that the winter road should be open in the next 7-10 days!!!


Helicopters are EXPENSIVE... And there are several variables depending on who wants to go and how much each individual is willing to pay.... For example:


IF we wait for the Helicopter company to ALREADY be in Moosonee or Attawapiskat, we could save a lot of money... However we would lose all ability to plan the dates of the trip, tailor it to weather, or there could even be the possibility that the dates don't work out and the trip doesn't happen at all...

IF we pay for what we want, it's more expensive, but then we can ensure we're up there for optimal weather (or optimal dates for your personal life) and more freedom in general...

IF you're interested - please e-mail me!!! - I'll send you my cell number and we can go over additional details together... I can't really sort out a more accurate estimate until I know who wants to go and how many of us there are..... 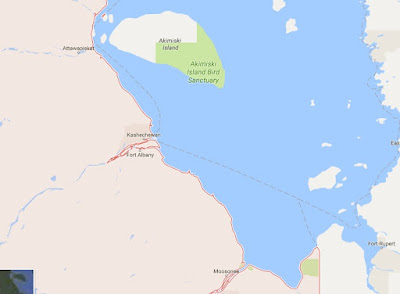 I meant to put this in, I should have put this in, and I didn't put it in originally! Thanks to Josh & Adam for pointing this out.

I tend to follow the "Ontario" border from google, which shows that most of the way from Moosonee to Fort Albany would be in Ontario, From Fort Albany to Attawapiskat we would probably be on the border somewhere (likely in Ontario earlier in the winter, possibly Nunavut later in the winter as the fast ice builds)... And then the polynya would most likely fall in Nunavut (however it's possible to be very close to the border or even in Ontario depending on ice conditions - but probably Nunavut)...

From a "list" standpoint, or birding in general, I think we will be venturing into a realm totally unknown when in the helicopter... It is very hard to say if there will be massive flocks of eiders (as our anon. poster highlights from an amazing adventure in the first comment) as the eastern shore (or the Belcher Islands) may be quite different than the western shore... As far as I know, the results of what we see may be the first of their kind to be presented to the wide world (web, print etc).

For me, I don't really expect to see anything I couldn't see otherwise in Ontario (even the possible mega rares like Fulmar, Dovekie, Murres, Ivory Gull etc). It's all about the "experience" of flying over a frozen James Bay birding in a place where we would have no idea what to expect. The possiblity of beluga, seals or polar bears are (nearly) as exciting as the birds... Plus  - I expect to see great birds regardless on the drive in the form of Grouse, Finches, Owls etc!

Thanks again gents for pointing this out! If anyone has any questions, comment, email etc. and I'll do my best to answer...

Sorry not sorry for the "cell phone through binoculars" photos...

They are both "northern" types (meaning they're holding juvenile plumage later than most)... And they're both at the pale-end (extreme?) of our NA Herring Gulls...

The strangest part (to me) was that they look very SIMILAR in their paleness, and they were TOGETHER on a beach with only a limited number of Herring Gulls present...

Makes me (really) wonder where these suckers were born!! (I'm guessing northern or eastern Baffin Island)... Who has a motus tag?!?! 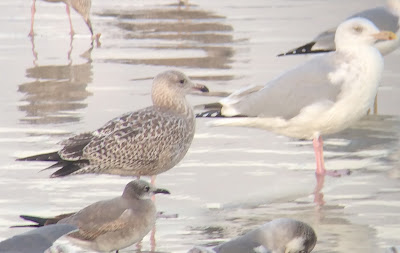 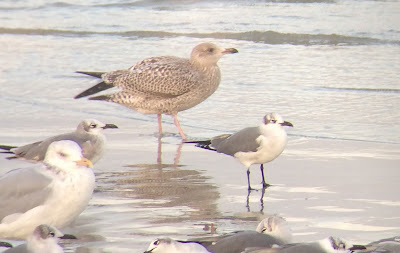 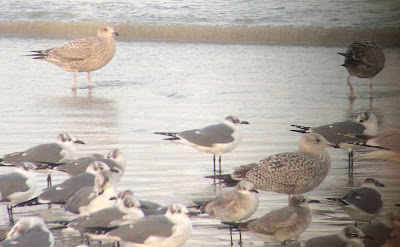 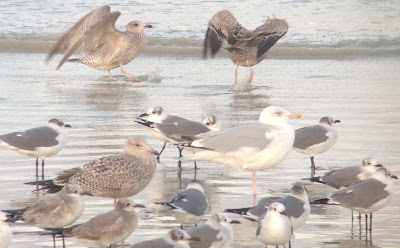 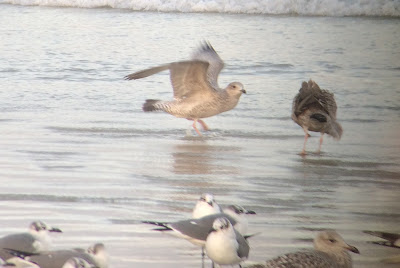 IF you don't like young Herring Gulls - here's a few ebird checklists with record photos of Franklin's Gulls instead:

A panoramic view of north/central Florida...


Was fortunate to spend the holidays in the sunny south! While there I decided to put the pano-mode on my iphone to the test & document some of the habitats we were able to visit... 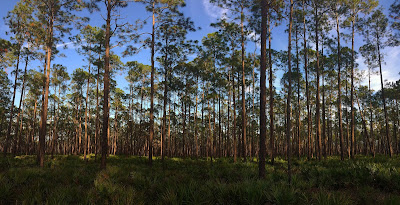