I decided today would be another exploration day. I went west! West I say... I checked several locations, from Portugal Cove to Colliers, stopping in several towns and coves along the way. At a sewer outflow I found the expected birds (Iceland and Black-headed Gulls etc), but it was also holding a handful of Greater Scaup, a Lesser Scaup and a fine drake Tufted Duck. Very few Black Guillemots the whole way (4), and no other alcids (boo)... I found 4 Green-winged Teal (incl 2 fine adult males), in a culvert along the highway with several Black Ducks. Common Loons, 100+ Common Goldeneye, A Lesser Black-backed Gull, Red-breasted and Common Mergansers - It started to feel like I was birding fresh water! I really had high hopes of some sick eider or alcid in close to shore, but constant sightings of the big gulls, Eagles and Ravens made me less and less confident of finding something. I eventually cut my losses and headed back to St. Johns. Hardly any finches around either! And no robins or waxwings......

I checked a few ponds when I returned. Burtons Pond had 24 Tufted Ducks - with several males looking really good - all in a tiny pool of open water. Someone arrived to feed the ducks, which meant all the Mallards & Blacks went up on shore - leaving clear views of the Tufted's. I spent some time taking pictures, until the other ducks returned. Still no sign of any Wigeon - never mind an adult male Eurasian - where did they go?

Back to Quidi Vidi for dusk. There was 3 Tufted Ducks at one end of the lake, and another female at the Virginia River outflow - making for 29 Tufted Ducks on the day. Not a bad count! The Common Gull was still around, but left before I could feed it. To top the day off, the adult Slaty-backed Gull was on the ice until I left for home.

- some very hungry ducks in town.

Fun fact of the day: Hamilton birders Bob Curry, Glenda Slessor and Cheryl Edgecombe have descended upon St. John's in a fury of bird-watching extravagance. We are heading down the south shore tomorrow in hopes of goodies!
Posted by Brandon Holden at 6:54 PM No comments:

Well that covers the first 3+ hours of my day. With a steady snow falling, I went to the "water hole" at Quidi Vidi lake in hopes of photographing the darn Yellow-legged Gull. It was snowing steady, and blowing pretty good as well. There were 2 Bald Eagles eating a dead gull on the ice, but the other gulls continued to visit the water. Several Lesser Black-backs and several hybrids made visits (no Great Black-backed X Glaucous though, where are they?), but neither of the "rarities" showed themselves - until the Yellow-legged Gull finally stopped by for 30-45 seconds (a quick drink before leaving):

Then another 1 to 1.5 hours passed without much excitement. I continued to photograph the various gulls arriving to drink and bathe. Finally the Yellow-legged Gull came back for 1-2 minutes for a splash around the water, which allowed for more pictures. It then flew a fair distance away to do a few seconds of preening (where I got the below image), before going back and disappearing into the group. Another hour or more passed before I noticed the Slaty-backed Gull had appeared to bathe. It stayed near the back of the pool, and was surrounded by other gulls - before quickly flying out onto the ice to finish preening. It wasn't very cooperative for pictures today, but I can't complain after the shots I got 2 days ago!

So yeah! 6.5 hours of sitting in the snow for 3-4 mins of Yellow-legged Gull, and a minute of Slaty-backed Gull. Actually it was pretty fun. I brought 2 loaves of bread, and would feed the tame gulls/ducks/pigeons when I needed something to entertain me. The adult Common Gull was around as well, and ate some bread! (4th day in a row of feeding it, I think I like it). If the roads are clear in the morning, I might be going in search of non-gulls again! A Greenland Hoary Redpoll is also coming to a feeder well south of St. John's. If it sticks around, it will be a big target for photography as well!

Fun fact of the day: The Great Black-backed Gulls here are sissies. All day, lots of fighting and posturing by the gulls at the small water hole. The Great Black-backs here take a lot of guff from the Glaucous Gulls. That sure isn't the case back home. Let loose a few "Lake Ontario" Great Black-backs around here, and these birds wouldn't know what hit them. The winter flock of Tufted Ducks would be gone in days! I didn't see a single Great Black-back grab another gull by the back of the head, and hold it under water - all day! Disappointing.


- ahhh the good old days back home...
Posted by Brandon Holden at 6:51 PM No comments:

Operation GBPOTTRGITWMECPOTYLG (Get better pictures of those two rare gulls in town with more emphasis currently placed on the Yellow-legged Gull) was put on hold today. I awoke to brilliantly blue skies, which are really nice - but create poor lighting conditions on Quidi Vidi lake for photography. I quickly decided that I would do some traveling today, heading north out of St. John's in search of whatever might show itself.

I visited Torbay, drove past Bauline without making it to the coast (whoops), Pouch Cove, Shoe Cove, Flat Rock, then back through Torbay.

It was boreal birding at its finest. Hardly anything to look at, but when you find birds - the quality is high. Pockets of Boreal and Black-capped Chickadees kept me entertained. I really wanted pictures of the Boreals, but they really weren't cooperating. After several pockets of birds, I finally decided to do some citizen science instead. For the fist time, I left my camera gear in the car - got out, pished twice and 4 Boreal Chickadee's hopped out low and in the open. Buggers! I threw my camera gear together, and thankfully 2 more eventually posed for a few pictures. They're pretty fast - so not a lot of time to worry about composition etc. But I managed a few: 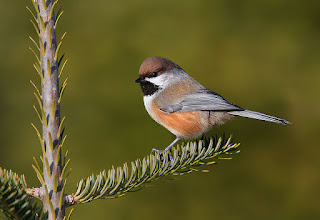 Other highlights while driving around were the finches; a few Purple Finch, Pine Grosbeaks and several flocks of White-winged Crossbills (are they finally arriving?!). Perhaps the most exciting discovery was a flock of Robins (about 200) in Pouch Cove. This town is on the far NE corner of the peninsula, the perfect place for a euro-turd to show up - and here I had the largest flock of Robin's seen in Newfoundland all winter... And all to myself! I probably searched through them for close to 2 hours, in hopes that some Fieldfare, Redwing or sulking Song Thrush would magically appear. Alas it didn't. A Northern Shrike flew over, carrying a small mammal - probably the most unusual sighting I had while there.

There was an abundance of Black Guillemots in the coves today. In Torbay, I had great views of the two subspecies together, and adult "atlantic" Black Guillemot and a snowy-white "Arctic" Black Guillemot. Really pretty birds! Now only if they'd come close to shore for pictures... I finished the day at Quidi Vidi where activity was pretty low. A dead gull lay on the ice, tempting the eagles downwards.

Fun fact of the day: is that I'm tired enough to not think of one right now! zzzzz
Posted by Brandon Holden at 6:49 PM No comments: