Still working away, but I couldn't turn down the chance to tag along with Ken Burrell on Saturday to do some Lake Erie birding. Ken wrote up most of the day in a post to ontbirds - which is great because it saves me some time: (Comments i've added are bold)


Posted by Brandon Holden at 10:14 AM No comments:

At the time of writing, I've managed to get 266 pictures re-sized for the website - or 1/4 of the re-sizing I expect to do in order to start getting my website back online. Not bad, considering it's painfully boring.

One neat thing is the chance to go back over all of the images I've edited over the years; and occasionally making changes. Sometimes I notice a dust spot that wasn't removed, or a slight change in crop. Occasionally I ponder what the duck I was thinking and re-do most of the post-processing. 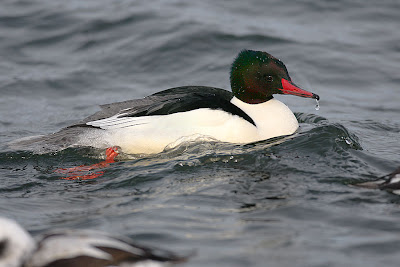 Enter, the Common Merganser. I spoke to anyone who would listen: this could well be the toughest bird to photograph in town. They're amazingly nervous, and yet not rare enough to warrant serious effort to capture them. Then came one fateful day at the Burlington ship canal; January 25, 2009
The wind was from the northwest at 350kmh, right across the frozen bay and in my face... Temperatures fell to somewhere around minus 96 C. (don't bother trying to calculate windchill) - just take my word on it... It was cold...
And there I was before the sun rose - bundled up to the max, lying on the cold concrete and wishing for ducks. What happened? Well the ducks arrived. Scaup, Redhead, Bufflehead, Goldeneye, Long-tailed Ducks, White-winged Scoters. They were all so close, I took my teleconverter off and photographed them at close range. No one dared wander down the pier in the killer weather - so I was alone to enjoy the ducks presence for hours.
They eventually came. Common Mergansers. The bird I thought I might never really get. Close and comfortable with me - I took home dozens of images and was happy as someone could be in the nutty weather.
So what's the point of this story? I don't know... But it reminds me of a happy time outside, and provides some extra motivation to get this junk done so I can head back outside to photograph the ducks again (and the other birds, of course ;)   ) Email ThisBlogThis!Share to TwitterShare to FacebookShare to Pinterest
Labels: story

I've actually put some serious work into the website over the last few days. Finally realized it should be top priority, considering my birding-crazy lifestyle! More than just a hobby

I also plan on updating the old blog more frequently... but this was posted to the ont-odes group this morning, and I think it's a combination of hilarious and ridiculous:

Why would anyone want to get rid of Dragonflies? How the heck do they do it?

Feel free to join the ont-odes group, information is here:

Even if you don't know anything about them, this is largely a no-rules group, with the goal of helping anyone, with an level of interest, in odes (dragonflies/damselflies) learn more!


One of my favourite odes! A Mottled Darner from Algonquin Park several summers ago.
Posted by Brandon Holden at 11:31 AM No comments:

I think the talk on Monday eve was potentially a success, although I did notice something. Most questions I was asked at the meeting had something to do with my website! Mainly:

When are you going to get your website back online?

The short answer: I have no idea. I haven't even started working on the new one yet, and I have enough things on the go that I'm slowly going crazy! Well, I guess that's not totally true - I have made one decision - that pictures on the new site are going to be around 900 pixels long. I did a few trial runs a few weeks ago: 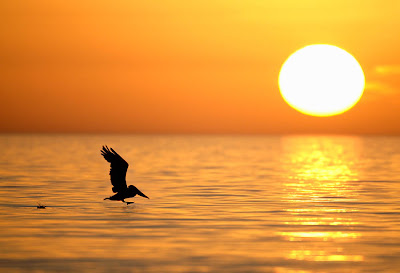 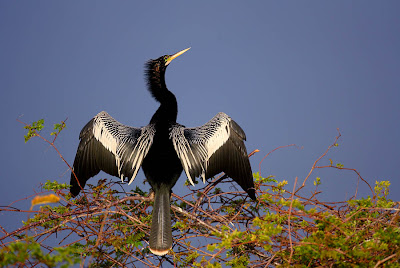 Hopefully soon the blog will be back on track, and I'll get some updates on the website in the very near future! Just hold tight for a few more days!
Posted by Brandon Holden at 12:03 PM No comments:

No news - talk on monday

Appologies for the lack of stuff. When things get busy, the blog dies down for a bit. Will update on January birding sometime soon, but for now:

-----
Come from where your at to hear and see Brandon Holden's depiction of his Birding invasion of Newfoundland.

The website is a bit out of date, but here's the news:

(Yes, I changed my date from October to January) earlier this year... But now it's happening!

45+ minutes of mindless chatter and bird photos from my Newfoundland trip last year! If you followed along with my blog in January and February of last year, you could hear it all again with this meeting. The only exception is I get to blow up my photos on the big screen.

Maybe see you there!?

Posted by Brandon Holden at 11:56 AM No comments:

I don't really have much time today! And the sketch post from a few days ago was fairly well received, so I figured i'd throw up two more sketches for now. 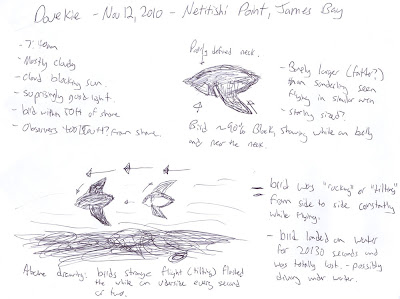 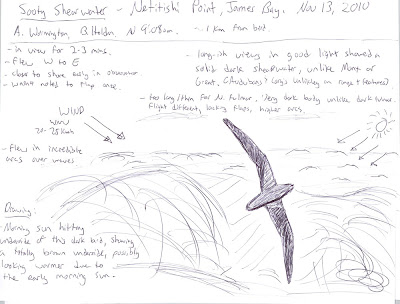 This one was tough, since it was more shape than details, and I really stink at drawing! (Never mind my handwriting). But it's still helpful! Right? maybe?
Time to roll!
Posted by Brandon Holden at 7:02 AM No comments:

Fun fact for the blog! On January 1st, the blog had it's 10'000th visit (after about 3 months on the new format).. Not bad! I must say thanks to everyone who checks the site. It's actually quite fun! Sooner or later I'm going to have to get some work done on my real website though ;)

Where the heck are the Snowy Owls? Clearly they're not in southern Ontario... After having Snowy Owl as my last species of 2010, I've already picked it up on my 2011 list (but probably the same bird, and the only one around...) See photo: 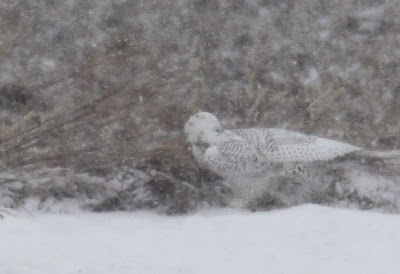 I guess one is better than nothing! Awesome birds...

I don't often post local bird things, since I figured most people who check the blog - already know of stuff like this! But I really enjoyed the above link, since tons of people always have trouble finding these beasts. Just in case you haven't seen it, check it out!

great photo - sure would be nice in Ontario!


Neat news story  - credit goes to Tyler Hoar for this one:

I started taking pictures because I can't draw... With that said, I'm currently working on a few things for the Ontario Bird Records Committee.

1.) I'm learning how to spell Committee. It's bad when the spell check doesn't even know what you're trying to say.

2.) I'm writing reports for birds I've found last year. I never really had time to finish them! A big help has been sketches I completed while I was up there. More on this below.

3.) I'm voting on records for the OBRC!! (first year on the team)... It's already pretty interesting. I'm sure the job is much easier today thanks to digital cameras!!!

So what does that jibberish above, have to do with this blog post? Well it has to do with sketching birds. I can't draw worth beans. I tried, and I ended up getting a camera. I've always been jealous of people who can draw - and have always thought Robert Bateman does some of the greatest things I've ever seen in print (sometimes I actually try to take photos that I think partially match his style.. if that's possible).

Ok - back to the point - sketches... I really can't draw (last time I say it, promise)... But even I seem mildly capable to draw rare birds, add some notes, and make something passable. They aren't the see-all end-all of my reports, but they really seem to add something.

As stated above, photos make voting for the OBRC really easy - but there are still a number of records that don't have photos! Those that have sketches add greatly to the report, whereas just text reports (while great) - are a pain to write and often get submitted to the OBRC rather short.

You see it every year in the report, and I've already seen some that will probably fall under the same category. " Person X probably did see bird Y, but there is not enough in this written report to accept it as a SCIENTIFIC RECORD*"

-----*getting records that pass the olde "scientific test" - the purpose of the OBRC. (not to try and shoot down your birds).

---
Ok, with all that said... Here are two of my recently submitted sketches (along with 2+ page typed reports, not shown here). 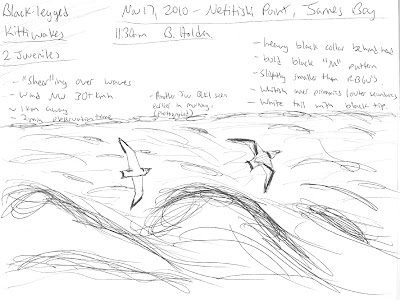 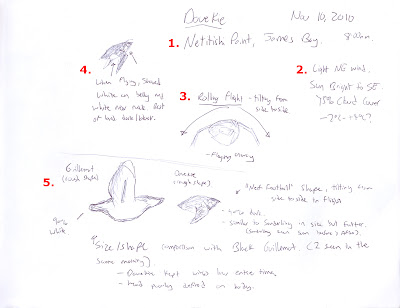 The red numbers added in photoshop after scanning. I figured my writing was poor enough, that I numbered the text, and typed it out in my report so the voting members could read what I wrote!
So there you go... my horrible skills put to work - trying to sketch things. I never thought I could do it, and yes they're still pretty ugly, but if I can do it - so can you!
Posted by Brandon Holden at 6:02 AM No comments:

Email ThisBlogThis!Share to TwitterShare to FacebookShare to Pinterest
Labels: story

Bird news for the blue

This will be one of those posts where I have nothing noteworthy to say, just fun things I've seen on the net in the past few days.


Probably one of the funnier things i've seen recently:

Posted by Brandon Holden at 6:28 AM No comments:

Was an ill-advised trip to the Niagara River! It was way too warm to hope for good gulls, but I went none the less.

I actually had the time to drive the river, heading to Fort Erie, checking gulls and waterfowl on the way. I found two impressive swarms of Bonaparte's Gulls, feeding in the outflows of a few small creeks, that were awesome to look at (a few thousand birds within 10ft of the road). Unfortunately there was nothing unusual with them at all.

Ducks were also pretty fun - great looks from right inside the car. I picked up most of the expected species of "Bay Ducks", with nothing really noteworthy. Even snapped a few pictures on the day: 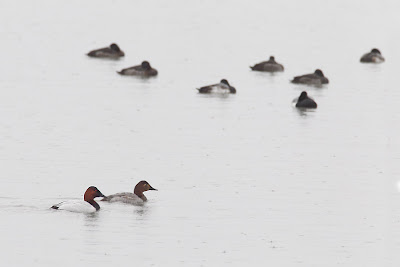 taken out the car window...


40 species total! Not terrible for a rainy day..
Posted by Brandon Holden at 8:25 AM No comments: