(Click for full sized/quality images)
What is this Gull?
Photographed in Mid August on the coast of James Bay, ON
(location here:

It's one thing to just pass it off as an unusual first summer gull (molting into 2nd basic)... But this was (I think) the ONLY gull of this age we saw during 2 weeks at this location. What are the odds that this really messed up gull is the ONLY one of it's age class?
What is it? Or what is wrong with it? Anyone?
Posted by Brandon Holden at 4:01 AM No comments:

Back to a real computer, but still short on time to do a real blog posting!

For now, some fun. Sep 25, 2011 was a spectacular trip out in the zodiac with my Dad and Ken Burrell. It turned into some photography highlights, with 2 Pomarine Jaegers and a Sabine's Gull spending prolonged periods at close range in the afternoon.


The photography was so enjoyable, I decided to fix up two of the photos to 1600 pixels, where you're welcome to use them as a background on your computer if you'd like. Here's the shots:

Dragonfly photography from the Summer of 2011

Female Sedge Darner. I thought this gal looked spectacular in her own right, and was thrilled to get a nice shot.

Male Sedge  Darner (not nearly as nice, in all categories)

Slaty Skimmer (pretty fond of this one too)

Belted? Whiteface
And a few from elsewhere in Ontario:

Halloween Pennant (and this one)

Halloween Pennant part deux
I think I have most of these on their species pages now :
http://www.peregrineprints.com/ind__odes.htm
\
Posted by Brandon Holden at 4:52 AM 4 comments:

Email ThisBlogThis!Share to TwitterShare to FacebookShare to Pinterest
Labels: photography

-- Jaegers are near the end of the galleries 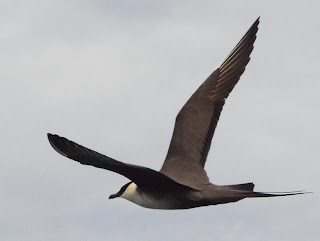 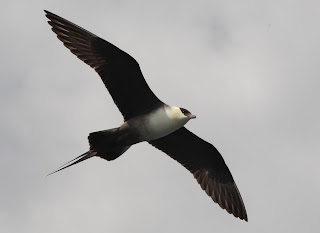 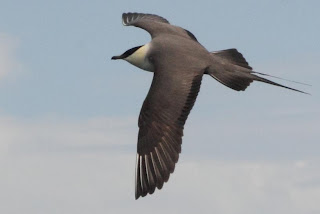 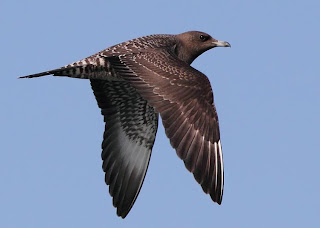 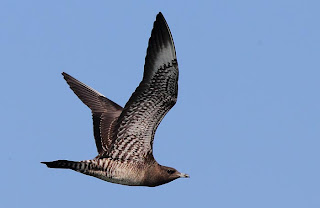 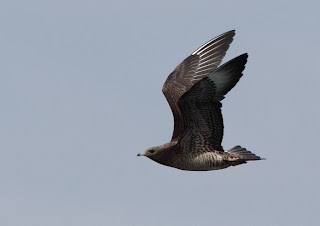 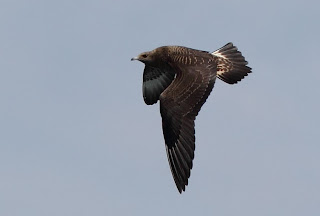 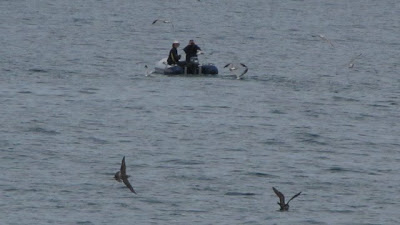 Zodiac in 2010 - photo by Bob Stamp - with 2 Long-tailed Jaegers behind us!
I believe we were saying something like "cr@p, they're way back there, why are we driving further away from them!? who's running this boat!?"
Posted by Brandon Holden at 9:15 AM No comments:

While birding Port Burwell/Stanley area on Sept 19, I had high hopes of Laughing/Franklin's/Black-headed Gulls, yet turned up empty. One thing that really caught my eye was some of the variation I saw in Ring-billed Gull skin colouration. Here's some shots: 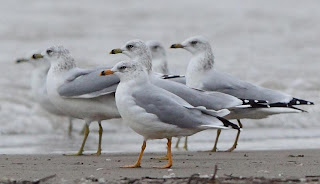 An "Orange" adult Ring-billed Gull. I have seen hormone-charged "Orange" birds a few times before  in the spring, but this is my first time getting some photos of an "Orange" adult in the fall. Funky 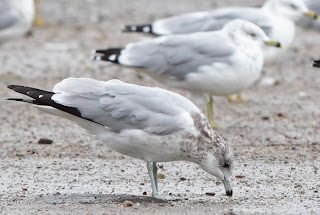 A 2nd Basic "Blue" Ring-billed Gull. First Summer Ring-billed Gulls often have their legs and/or bills turn blue for a short period. But most tend to loose it come fall/winter. This bird kept it though!
(Note: most field guides will tell you blue legs/bill is a good indication of California Gull in 2nd winter.. Which it is, it just isn't diagnostic) 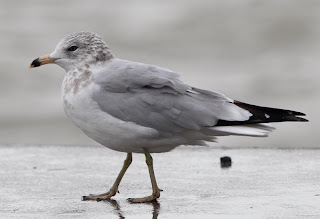 It's also pretty regular to have 2nd basic birds with a peach/pink tone to the bare-parts. This was one I managed a few shots from (all pics taken the same day) 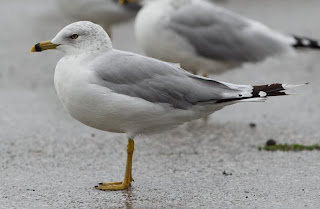 Peak rarity season is upon us

My research indicates that the Sept 23-25 period is the beginning of peak fall rarity season for fall birders. It tends to go until (roughly) Nov 7-10... Obviously the whole fall can turn up spectacular birds, but this is really the period when numerous rarities are found..

I actually noticed it was happening recently when surfing for rarity photos from nearby states/provinces:

Says' Phoebe in Quebec (#1 of three I think!? If only I paid attention in french class!)

(also a Say's Phoebe in NJ)

A little out of range, but very exciting: Violet Green Swallow in NJ


Oh and quebec has now had breeding Eurasian Collared Doves before us!:


--- And these are just the photos! Lots of other good birds are showing up (including Ontario - Presqu'ile has been on fire!)

With each violent weather system that passes, more rarities will show up! Keep on lookin!
Posted by Brandon Holden at 1:32 AM 1 comment:

More extra curricular birding... Had some spare time to drive some roads around Wolfe Island...

Saw my first "Todd's" Canada geese from the North in several flocks... Now is the time for Cackling Geese to arrive. I wrote about it a while ago, so if you're interested, now may be a good time to check it out again:

(shameless self promotion, I know).


The main highlight was 4 adult "Lesser" "White Morph" Snow Geese in the SW corner of the Island (not the arm, just up the road from the USA ferry). I also had an adult Peregrine Falcon riding the airwaves up and down the shore here.

Snagged about 70 American Pipits, lots of other waterfowl, numerous Kestrel's and Harriers, a few shorebirds (yellowlegs), but overall fairly uneventful. This place really seems under-birded to me, and I really enjoy being out there. And it will only get better over the next 2-3 months .

Starling on Wolfe. Wolfe isnt "easy" to bird, but there are very large numbers there to be found.. Not that anyone cares about Starlings, but I had thousands upon thousands!

http://www.wolfeisland.com/ferry.php
Posted by Brandon Holden at 3:42 PM No comments:

There has been some recent talk about "Black Swifts" on ID-Frontiers. You can read the recent messages here:


There was some talk about the Point Pelee Black Swift my Dad spotted while we were at Pelee a few years ago (2009, a parkinglot watch), but with limited photos online of the bird, I figured I could help out a bit more.


I was actually preparing some of these photos for another recent request, so it worked out pretty well. Anyways here's the photos of the bird.

Posted by Brandon Holden at 7:47 AM No comments:

I did some extra curricular birding on Monday... Why? Wind!

Wind and Lairds of course... Port Burwell was kinda smelly, but multiple reasons (not including smell surprisingly).. But I did turn up 4-5 Little Gulls.... Will elaborate on this in the future (maybe)

The real highlight was Port Stanley Harbour, which had the lions share of Larids of the places I checked.


Tons of birds were taking shelter from the winds and waves (50kmh, 2 meter waves) even the Parasitic Jaeger (a light Juvenile) spent about 15 mins inside the breakwalls... Only chasing gulls infrequently. Looked happy to be off the rough water.


Thankfully I stopped at my trusty bread locale and had a very large supply. I busied myself throwing out huge amounts of the wheaty good-stuff, and took a bunch of gull pics (baby Herring Gulls, Lesser Black-backs and even the Jaeger)... May not sound terribly exciting, but throwing bread and photographing Larids is probably one of my favourite activities there is.....

Some of the documentation (just a sample, maybe I'll do more in the future)

Some of those crazy Herring Gulls I like to doccument.. Check out that tail!

One of my favourite gull/plumages by far - fresh juvenile Lesser Black-backed Gull.. Is there any chance this sucker was born in North America?! I sure think so 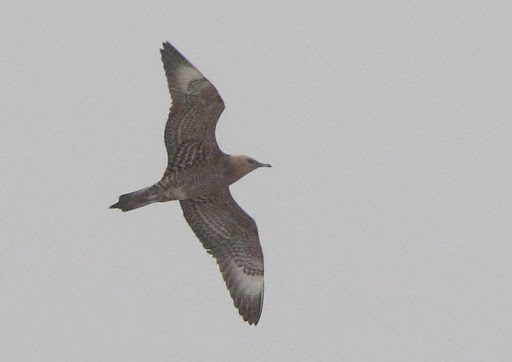 And of course, the terror of the Larid world... The Parasitic Jaeger
Posted by Brandon Holden at 3:22 AM 1 comment:

Last Wednesday in Sault ste Marie, a Boreal Snaketail allowed me to snap some pics at Point des Chenes park (near the airport, on the lakeshore).

Check it out here:

This was a new species for me, not that it's really rare or anything, I'd just never been far enough north in the right season (and looking) ! (for the most part) ..  ...
I've pumped this a few times, and ode season is nearing its end for 2011, but please feel free to join up to the Ont-odes group if you want to know what ode'rs are looking at in the province!
http://groups.google.com/group/Ont-Odes
There's some cool talk in there recently about Common Green Darners ! Check it out!
+ one last pic of the Boreal Snaketail