Given the incredible potential for the discovery of vagrant birds associated with tropical storms and hurricanes it comes as no surprise that there is considerable interest among the birding community in regards to these occurrences.  Combining established terms with a few new ideas, I propose this terminology in an attempt to help categorize the unique avian discoveries associated with these storm systems and theorize on how the meteorology is responsible for them: Grounded, Deviated, Displaced, Entrained or Adrift. Major Hurricane Sandy (2012) provides a case study for the use of these terms. 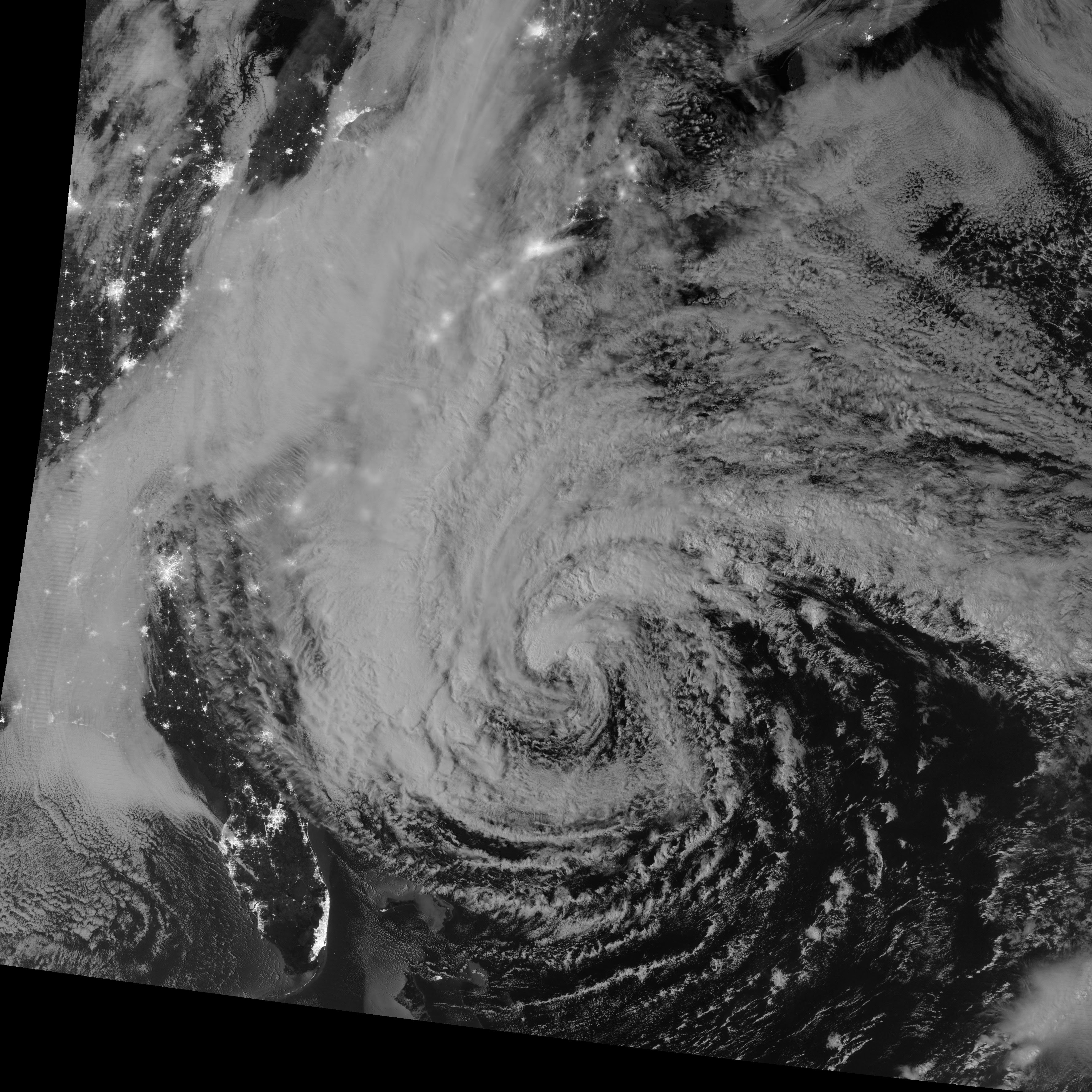 GROUNDED -
A term often used for the effects of general precipitation, extratropical low pressure systems and cyclones also strongly applies to tropical cyclones and their post-tropical remnants.
The mere nature of powerful weather systems is a basic weather process where low pressure occurs in the centre, with all low-level air flowing into that spot. In terms of migrant birds, this air flow would be likely to draw the birds closer towards the centre of the storm where winds and precipitation increase. Presumably any individuals who have become caught up near the centre of a very powerful storm such as a hurricane are unlikely to then be able to leave, as flight in any direction presents headwinds that would impede flight. Indeed, it may be only the most powerful birds that would even be capable of escape while the rest would eventually be forced to take shelter and ride out the storm off the wing. This process is perhaps best demonstrated by the frequent groundings of large numbers of strong migrant shorebirds such as White-rumped Sandpipers and Hudsonian Godwits in Ontario over the years.

The grounded terminology can also be applied to some vagrants associated with the passage of these powerful storms as the process of drawing birds towards the centre and subsequent grounding can apply in the same way. A remarkably large Hurricane such as Sandy was a prime example of this as vagrants such as Gyrfalcon, Ross’s Gull and Northern Lapwing were recorded in both Canada and the USA following the storms passage despite the fact Sandy’s entire track did not cross any area where these species are known to occur regularly. It is therefore likely that the massive wind field of the system was able to draw these species towards the centre of the storm from great distances and subsequently ground them at locations where birders were actively searching for other hurricane waifs.

Sanderling "groudned" in advance of Hurricane Sandy's arrival in Ontario, 2012


DEVIATED
A proposed “middle ground” term somewhat between birds grounded or displaced by powerful weather systems, as used in the case of hurricanes here. Hurricane Sandy provided some superb examples of species that were very likely deviated from their expected migration routes or patterns of occurrence; primarily Brant. As the wind field of Sandy curved N and NE winds into southern Ontario, large numbers of Brant occurred throughout the southern half of the province to the west of their typical migration route. One can assume that these migrants, who had recently left the James Bay region were deviated off course by Sandy’s winds in what may have been little more than an inconvenience or a simple attempt at energy conservation during the Brants’ migration. It is important to note that birds directly involved in migration need not be the only example of deviated, as in other scenarios birds could be deviated beyond their typical range of occurrence by the same process. It is also worth noting that this process can often be shown by extratropical storms as well. This is in contrast to birds directly displaced by a Hurricane, as detailed below.

Brant "deviated" westwards from their normal migration route to Hamilton, Ontario; in advance of Hurricane Sandy's arrival in Ontario, 2012


Black-legged Kittiwakes likely deviated from the mouth of the St. Lawrence to Van Wagner's Beach, Ontario  on Oct 29, 12. The date and wind direction at the time were used to determine the reasons for their occurrence here.


DISPLACED
A term that has been used in the past to detail the potential for vagrants associated with hurricanes which also played a significant role in the unique avian occurrences in Ontario during Hurricane Sandy. Where species such as Brant were likely deviated on their migration to little concern or consequence, a prime example of a species often displaced by a Hurricane would be Leach’s Storm-Petrel. One of the token species involved with Hurricane Sandy  these birds occurred as powerful winds (presumably around tropical storm force) physically moved individual birds ashore and inland. While impossible to say for sure, this action was likely against the birds’ will; as a combination of their surroundings, along with their own physical abilities resulted in them being displaced to areas where they are rarely or never found. Indeed it was documented that some Leach’s Storm-Petrels met their demise soon after their discoveries at inland sites. While it is possible for extratropical storms to cause displacement of birds in this manner, it is often strongly associated with Hurricanes as their large size and incredible power are a predictable event to observe the phenomenon.

Leach's Storm-Petrel displaced by Hurricane Sandy to Hamilton, Ontario -2012. The key here is the physical, forceful movement of a bird to a new location. This definition would also apply to the appearance of pelagic species "on shore" during hurricanes along the seaboard.

ENTRAINED
Perhaps the only term here that can be specifically linked to Hurricanes, it is important to note that Hurricane Sandy likely did not produce any entrained birds in Ontario and likely very few overall in the USA. The term entrained has been used to describe how birds become entrapped within the eye of a powerful Hurricane. While the eye of a Hurricane is typically calm, clear and sunny when well formed; the nearby eyewall is generally the most intense part of a Hurricane, with winds in the 150-300kmh range. One can only assume that birds become entrained when they chose to stay inside the clear and calm eye, rather than attempt to escape into the intense thunderstorms with 200+kmh winds that are continually blowing them back towards the calm eye. This process is would be very rare in extratropical storms, given the potential requirement of an eye feature for it to take place and distinguish the phenomenon from displaced birds. (It would still be possible to "follow" a weather system though, without an eye feature). A hurricane forms an eye only when it is well organized within favourable conditions and is due to the difference in nature of a warm core tropical system. For most of Sandy’s life, the system did not have a well defined eye and would be unlikely to have trapped very many birds in this manner. Other Hurricanes to affect in Ontario in the past have not had an eye feature when present in our area, as an eye would collapse with any extended interaction with land. However for the simplification of the term, any species or individual previously entrained within a Hurricane should maintain this definition even after the eyewall collapses and the birds are transported further by strong winds.

Black-capped Petrel from Fort Erie, Ontario (2003) after Hurricane Isabel. The eye had collapsed by landfall, but the bird was likely entrained by the storm while a major hurricane while at sea.


ADRIFT
A final term proposed to help explain many remarkable bird observations that have occurred following tropical storms or hurricanes that are difficult to apply to the above criteria. The term can be used to describe records where birds have occurred well away from the direct area of influence from a tropical system, often several days (or more) removed from the dissipation or absorption of the tropical remnants as well. In short, it involves individuals or vagrants that were affected in any of the above four criteria, but have become unable to return to their typical range or behaviours. These birds could now be classified as “adrift” as they wander widely in new areas for any period of time as long as they survive. It was difficult directly attribute any Hurricane Sandy sightings in Ontario to this phenomenon, past examples display this effect well. The quintessential species that could be attributed to an “adrift” bird is the Magnificent Frigatebird, which is well known to occur long after a tropical system has dissipated, and sometimes great distances from the area of influence. Northern Lapwings grounded in North America during Hurricane Sandy were "adrift" for several months after the storm had passed.

Northern Lapwing from February 2013 in Georgia. Likely "adrift" from the effects of Hurricane Sandy in October/November 2012.

Additional thoughts, comments, ideas etc welcome. This post can and will be updated going forward.

Posted by Brandon Holden at 8:37 AM