This late-to-the-party Dovekie photographed on Nov 30th came from James Bay. Want to know how I know? 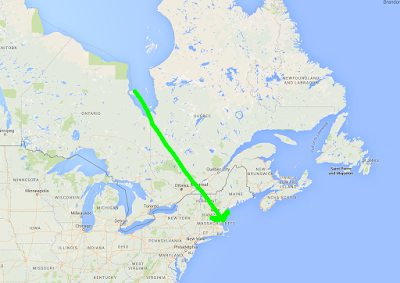 To begin, some background. I firmly believe that Hudson and James Bay trap ungodly numbers of rare birds (especially waterbirds) that "birders" never get to see... There's no one up there. Since much of this coastline is in Ontario, you'd think Ontario birders (and the Great Lakes) would be the secondary location where these birds occur, but I don't think that's the case. It is generally COLD NW to W winds that push birds off of Hudson Bay in the fall, and as the green line shows above - I think they fly over Quebec and towards Massachusetts (etc), meaning Ontario birders miss out. (And also why MA birders get nutty things like Gray-tailed Tattler)

So what does this have to do with the Dovekie in Oakville?!

If we rewind the weather, the important feature is the weak cold front over Hudson Bay (green)

A day later, it is pushing SE - or bringing NW winds, right where it usually would... This front is fairly weak, but notable in that it was a blast of freezing/arctic Air (think -20 at night)... And it has been very warm on James Bay this fall, so this was one of the first mass-buildups of ice along the Ontario coast....

A day later, (Dovekie day) the front has pretty much died, and - which is somewhat unusual - high pressure has formed over the St. Lawrence, and is (hypothetically) blocking any migrating/freeze-out birds from their usual route into Quebec/NE USA and towards Lake Ontario. There were NE to NNE winds at the lift bridge in Burlington all day and the Dovekie is found in Oakville that evening.

Supporting this theory is a small rash of King Eiders that hit Lake Ontario (and Erie) at the same time... One thing i'd really like an answer to (if this theory is true) is --- Did the Dovekie and/or King Eiders fly at night or at day? Or Both? And did they hit Lake Ontario at the west end? Or did they actually get blown (or just fly) to the west end on the NE winds?

Overall this is not a weather event I would (normally) get excited about. I think there was a heavy dose of luck involved in bringing/locating a Dovekie... Pretty exciting stuff!

Posted by Brandon Holden at 1:16 PM