What (I think) I've learned about Meadowlarks

We don't know everything. Anyways, here's a breakdown of what (I think) are the KEY features of the Meadowlark we had at Pelee on 25 April 2016, based on a variety of resources and commentary from a handful of experts.

Western Meadowlark is pale. Tertials and centre tail feathers are pale with dark barring. Malar has at least some yellow MOST of the time, but not always. Colder/paler tones overall lacking rufous. White on tail variable but mostly (always?) a "dark tail" with a bit of white on the sides (40-50% white). Crown stripes brownish. Eyeline thinner on average. Undertail coverts normally streaked. Sides typically have a more "spotted" look (more oval shaped markings). 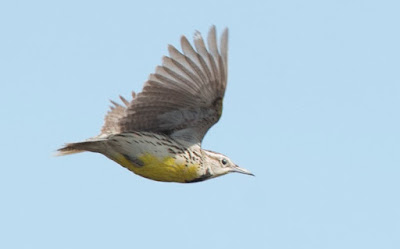 Eastern Meadowlark has an overall pattern of dark markings & rufous that is unlike Western or Lilian's, which show an overall paler plumage. To that end, Lilian's should be different from Western by showing limited markings on the sides - and (maybe) the undertail markings - and especially by the amount of white in the tail feathers. Lilian's has the MOST white in the tail while Western has the least. Should be clear cut, right? 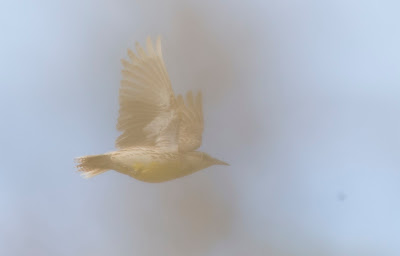 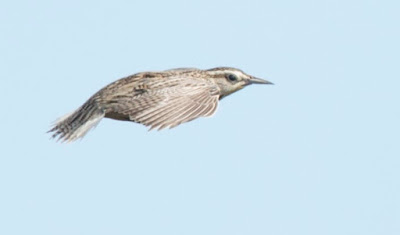 Well - apparently it's not. Here are my thoughts: 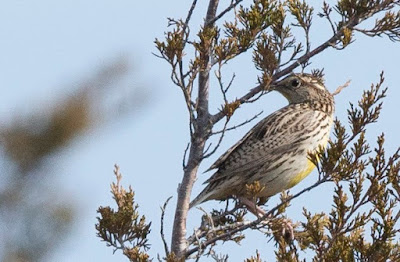 The overall dramatic "paleness" to this bird should rule out "Eastern". The head stripes, eye stripe etc. are not blackish, there is no rufous/rich colour anywhere... 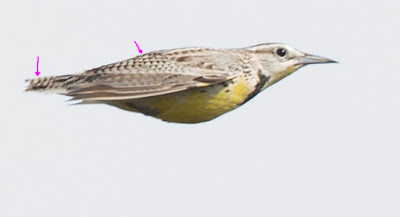 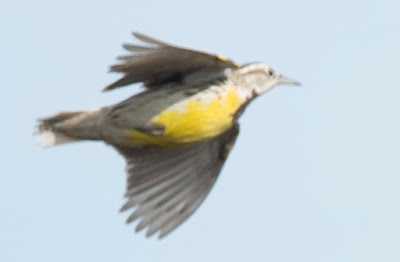 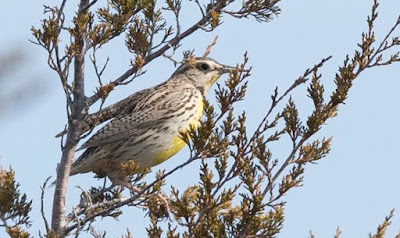 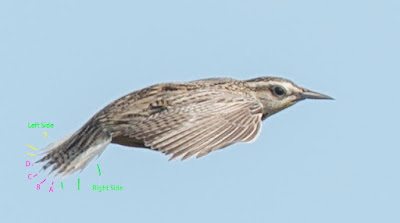 Something I haven't noted yet. Meadowlarks have 12 tail feathers (6 on each side). I never expected to have to worry about it, so I didn't get a *definitive* shot showing all the feathers (I took what I could get on one pass, then left the bird alone)... 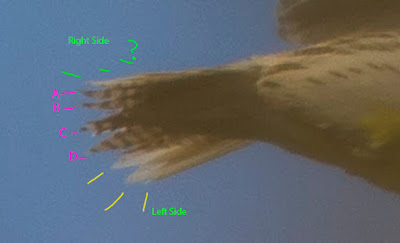 With these feathers we can focus on what should be the most obvious feature between Western and Lilian's.. The amount of white in the tail feathers... Bear with me - but I think this makes sense. In each of the above photos - the pink text shows four dark centre tail feathers - and no photo really makes me think it has more than that...

Using a combination of photos, I think we can confidently say the bird has at least three white tail feathers on its right side (thanks to the first photo - green lines) and 2-3 are visible on the left side (lower photo).


If you're good at math (like me) you'll realize that we're two feather short - which is why I noted above that I failed to get the definitive shot... BUT - in the above photos - I think we can say the bird has a lot of white in the tail.... Not only that but the feathers visible in the second photo on the left side (yellow marks0 show a few tail feathers that are TOTALLY white at the tip. As far as I can tell, even the Western Meadowlarks with an abnormally high amount of white in the tail - show dark markings near the tips of the white feathers. (Like this bird here). (or this one). 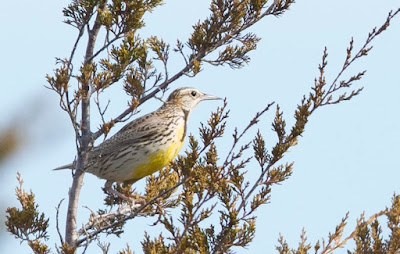 So as far as I can tell, this bird checks off all the boxes (visually) for "Lilian's" Eastern Meadowlark. It would have been nice to hear it call, but it didn't. I would be interested to hear if anything on this bird doesn't line up with this identification, or if I have anything wrong in terms of field marks. It just shouldn't be here.

Likewise, IF this bird were not a "Lilian's" Meadowlark, it would break a few established marks in separating the following species.

"Eastern" Eastern Meadowlark - IF it were this subspecies, it would mean that our regular birds can show a very pale plumage as normally associated with Western or Lilians. This wouldn't only include paler markings on the crown/eyeline/back - but a fundamental difference in pattern on the tail, tertials etc.

Western Meadowlark - IF it were this species, it would mean that several "breakable" rules were broken, such as no yellow on the malar or more "streaky" and less "spotted" marks on the side, Another rule that could be broken (but books say shouldn't be) is the near lack of markings on the undertail coverts. I've found a few photos of birds lightly marked here - but the vast majority are nothing like this bird. Finally, if my tail-feather analysis holds water; that this bird has a lot of white - then this bird would be an EXTREME tail pattern for Western. I just cannot find Western Meadowlark tails that have pure white tips on any single tail feathers.

So there you have it. My thoughts, in text form. In this instance, it brings me peace of mind to know that I have these photos - and as our knowledge increases - I can look back and recall these stills at anytime (or anyone else for that matter). I will be particularly interested to see if anyone either knows - or learns - that first-year Meadowlarks show more white/less markings - or if they typically show less white/more markings than adults. I think that'll be a VERY telling piece of information (if it's useful - perhaps it wouldn't be). Pretty much everything deals with adults - and 90% males.

So there we go! Now I can get back to more interesting things - like the weather.


As always - thoughts/comments are appreciated!

Posted by Brandon Holden at 9:51 AM