Near Puslinch, ON (Maybe 15-20mins max from where I sorta live in Guelph)

The old tale of "Found by birder X, confirmed by birder Y, re-found by birder Z" - and then I decided to make the trek myself. Congrats to the finders and those involved with getting word out. 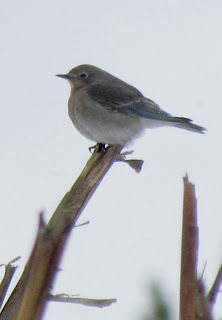 Got to see the beast pretty quickly, with some good company, and did the evil-awful-twitcher thing where I watched for 2 minutes then left (I was freezin my ___ of) ... Although even in that short time frame, I got to see the bird fly a few times and also had a nice flyover of a Raven.

Snapped maybe 5 pictures with my point and shoot, and I was pretty happy. I uploaded the above image to my "rare bird gallery" flickr page:
http://www.flickr.com/photos/bhbirds/
Pre website-crash I had these iamges on an "unusual ontario birds" page, but it was too much work to re-create  -- and flickr was just so darn handy. Have a scroll through for some previous years fun!
Posted by Brandon Holden at 3:47 AM