Looking into the future: Caribou Island

If you thought I was 100% hooked on going to Netitishi Point on James Bay, well, you're right... But that's not the point of this post.

There is another fabled location in Ontario that I'm dying to visit, known as Caribou Island. 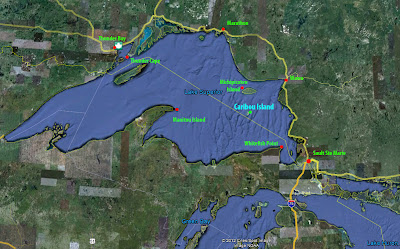 Nestled way out in Lake Superior, is this stunning little island. While Michipicoten Island may only be 35km to the north, the nearest mainland is a staggering 62km to the NE. While mainland Michigan falls in the range of 72km to the south.
Talk about some serious open water!
Further more, the island is a very manageable 2.5km by 5km. Here's a closer view: 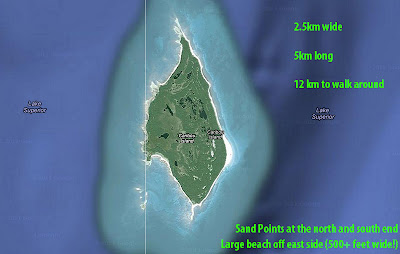 Looks like a dream come true in terms of vagrant potential. Taking a look at nearby locations, there is an incredible pattern of rarities occurring along the lake:
Whitefish Point, MI - Records of Lucy's Warbler and Short-tailed Hawk are mind-boggling, along with Inca Dove, Common Ground Dove, Brewer's Sparrow, Least Tern, McCown's Longspur, etc. etc. etc. This is surely one of the top vagrant traps of the Great Lakes.
Manitou Island, MI - I detailed some recent bird records a while ago for this location, which is hard to access, and has only recently been visited by birders (maybe 15 trips for various lengths, some only a few days). Yet they've managed to turn up great birds like Say's Phoebe, Scissor-tailed Flycatcher, Yellow-throated Warbler, Smith's Longspur, California Gull, Black Vulture, Snowy Egret and several Swainson's Hawks.
Thunder Cape, ON - one of Ontario's gem's, this bird observatory has also brought the heat when it comes to rarities, like Sulphur-bellied Flycatcher, Brewer's Sparrow, Bell's Vireo, Green-tailed Towhee, Virginia's Warbler, Sprague's Pipit, Chestnut-collared Longspur, Bewick's Wren and Violet-Green Swallow... Not to mention neaby Dusky Flycatcher and Black-throated Sparrow....
Soo... Caribou Island, ON - ???
A visit to the Island from May 6-20, 1981 by Robert Nisbet resulted in reports of Clark's Nutcracker, Smith's Longspur, Baird's Sparrow (not accepted, but ??), Barrow's Goldeneye, Yellow-breasted Chat and Black-headed Grosbeak (also not accepted, but very possibly a good record).
Another visit done May 23-June 1 1984 by R.N. turned up less in the way of mega-rarities, but had a very respectable list including Field Sparrow, Nelson's Sparrow, Purple Sandpiper, Dickcissel, Marbled Godwit and Yellow-throated Vireo
The first birding trip to the island was in the fall of 1979 by A. Wormington and R. Finlayson. They spent time on the island from Sep 18 to Oct 20! Their records included sightings of Harlequin Duck, Blue-gray Gnatcatcher, Townsend Solitaire, Yellow-breasted Chat(!)  and 7 individual Harris's Sparrows.
--- The above records, from various places along the Lake, is spectacular. At the same time,  I almost get a queezy feeling in my stomach when I think about the CMF's that have very probably graced the landscape of Caribou Island - without anyone there to see them.... The only way to fix this, is to visit!
My schedule in 2012 looks pretty full so far, so as long as the world doesn't end before then, the spring of 2013 is looking pretty tempting....... I also have theories that the photography on the island (in the spring) would really be awesome as well... But for now, I'll just think about the rarities.